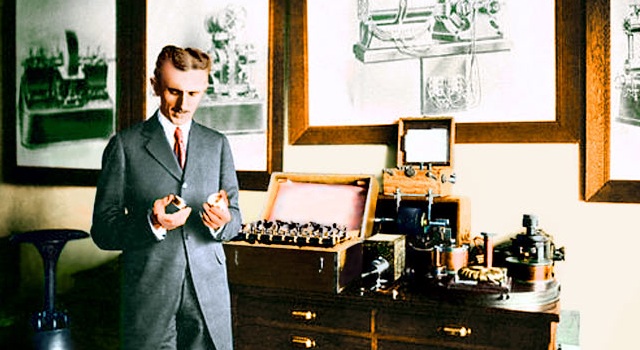 You would not be reading this story had inventor, engineer and scientist Nikola Tesla not been born in a small Serbian village in 1856. Mr. Tesla was recognized as a genius at an early age and studied electric engineering at the Austrian Polytechnic school before going on to become one of the greatest inventors in history. He built a lot of the technology that drives our computers, cell phones, blenders and automobiles and makes possible our digital, electric modern lives. He battled Thomas Edison, developed plans for earthquake machines, and almost single handedly invented AC power and the foundational theories of how to use it on a large scale. He’s been called “the greatest geek who ever lived” (which is saying a lot; geeks built our world).

Mr. Tesla held various electric engineering jobs throughout Europe before moving to the United States in 1884. Landing in New York City with just a few cents in his pocket, he found employment with Thomas Edison thanks to a recommendation letter that, if truly written, stands as one of the best in history—Charles Batechelor, a contemporary of Edison and a talented engineer and inventor, is supposed to have written to Edison:

“I know two great men and you are one of them; the other is this young man.”

While working for Edison, Mr. Tesla made major contributions in engine and electrical generation and transmission technology. He and Edison had a falling out and he started his own company in 1886. He continued plowing through science, technology and engineering, making huge leaps in electricity generation (he was transmitting power wirelessly to street lights in a time when most of the world got around on foot or by horse), radio transmission (he built the world’s first transmitter), and computer science (he invented the AND gate, whose cousin the NAND gate forms the base of all that is possible with computers).

Volumes have been and will be written about the breadth and width of the contributions Nikola Tesla made to our world (a good case is brilliantly put forth here by The Oatmeal), but I’ll focus on a few of my favorites here (read a full list of his ~300 patents here). Here are three amazing things invented by Nikola Tesla.

All digital technology, from the computer or smart phone that you’re using to read this to the microwaves that heat up our leftovers to the pacemakers that help regulate irregular heartbeats is built on a sea of 1s and 0s—the binary building blocks of our modern life. Zoom down far enough onto a circuit board and you find a network of connected “logic gates,” tiny little structures that pass and regulate electric current in different ways. You can imagine each gate having a gate keeper that allows the current through if the conditions are right. An AND gate will allow electricity to flow (which is seen as being “on” or 1) only if all of its inputs are flowing with electricity (no electricity is taken as “off” or 0). An OR gate will allow the electricity to flow if at least one of its inputs is “on.” In addition to AND and OR, there are also NOR, NAND, XOR, XNOR and NOT gates. These handful of logic gates can be assembled to do any kind of computation (in fact you can actually build any other gate using just the NAND gate) possible.

Computer chips can easily have billions of microscopic logic gates, all connected in a way that allows them to do the work we design them to do. Logic gates move the electric signals that we abstract our lives on to. As you are reading this article, an untold number of logic gates are clicking on and off to make it happen. There is a connection of logic gates between your eye and my typing fingers, an almost unimaginable number of OR, AND, and XOR gates channeling electric intention to drive the computer I am writing on, the servers and routers that channel my words around the internet, through to the computer, cell phone, or refrigerator that you’re reading this story on.

Tesla invented the logic gate as part of wirelessly controlled miniature boat that he unveiled in 1898. His invention, which he called a “teleautomaton,” was the first machine built capable of being controlled wirelessly with radio waves. His need to control the signals between the boat and the wirelessly connected driver lead him to devise a part that would toggle an electric signal one way or another depending on a set of prescribed circumstances (if all incoming signals are “on,” toggle “on,” else toggle “off”). Tesla’s logic gate was refined, shrunk and propagated throughout the world, but at the most abstract level it hasn’t changed a bit.

The wireless transfer of electricity and information

As the calendar clicked over from 1899 to 1900, Tesla was busy planning the design and construction of a tower that would, if it worked as he thought it would, revolutionize our world, bringing wireless communication and electricity to anyone on the planet more than a hundred years before the iPhone. Tesla was given 200 acres of land in Long Island by James S. Warden, a rich lawyer, banker and land developer, to use to build laboratories, work space and the Wardenclyffe Tower, his most ambitious project at the time. The Wardenclyffe Tower was designed to transmit both electricity and information through the air, allowing any device equipped with an antennae to operate without being physically plugged into the energy grid and to gain access to a worldwide communications network that sounds eerily similar to our modern day system. In an 1908 interview, Tesla described his proposed system:

As soon as completed, it will be possible for a business man in New York to dictate instructions, and have them instantly appear in type at his office in London or elsewhere. He will be able to call up, from his desk, and talk to any telephone subscriber on the globe, without any change whatever in the existing equipment. An inexpensive instrument, not bigger than a watch, will enable its bearer to hear anywhere, on sea or land, music or song, the speech of a political leader, the address of an eminent man of science, or the sermon of an eloquent clergyman, delivered in some other place, however distant. In the same manner any picture, character, drawing, or print can be transferred from one to another place. Millions of such instruments can be operated from but one plant of this kind. More important than all of this, however, will be the transmission of power, without wires, which will be shown on a scale large enough to carry conviction.

Tesla raised funds for his project from investors like J.P. Morgan and John Jacob Astor, then began construction. The Wardenclyffe Tower was nearly completed in 1904 when most of Tesla’s investors withdrew their financial support. Tesla was unable to raise more money and the facility was abandoned by 1911.

Wardenclyffe has been in the news recently thanks to a campaign lead by the popular internet cartoonist The Oatmeal, who is raising money through the crowdfunding site Indiegogo to purchase the Wardenclyffe grounds. The Oatmeal, responding to the possibility that the land could be commercially developed, rallied the fundraising campaign around the idea of turning it into a museum dedicated to telling Nikola Tesla’s story. As of the time of this article’s publishing, $TK has already been raised toward the $850 thousand goal (there is a matching state grant).

In 1898, Tesla claimed he had built and deployed a small oscillating device that, when attached to his office and operating, nearly shook down the building and everything around it. His oscillator was a small device weighing just a few pounds that would create countering force on a fune-tunable level (think of a free-standing piston popping back and forth that you could control with a dial). Tesla said that he was able to tune the timing of the oscillator to the natural harmonic frequency of the building in such of way that each small oscillator motion added just a little more energy to the wave of flex in the building. Given enough little pushes, even the largest structure could be shaken apart. Make the pushes big enough and maybe even the ground itself could be shaken apart.

That’s what Tesla said happened—his device produced waves of energy that spread to the buildings around his office, causing people to panic at the unyielding earth quake. Realizing the potential for large scale havoc, Tesla said he took a hammer to the oscillator to disable it, instructing his employees to claim ignorance to the cause of the tremors if asked.

Sadly, Tesla never properly demonstrated his oscillator (he told the story of the shaken building years after it was to have happened) and eventually sank into financial ruin as his health and mental clarity degraded with age.

The TV show “Mythbusters” spent some time exploring the idea of the Tesla Oscillator and were able to build a small, 6-lb. oscillating device that created strong vibrations throughout a large steel bridge. It’s not a hard jump to the idea of a larger device (what happens at 25 lbs., 50 lbs., 100 lbs.?) being able to shake loose the bridge. What would happen with a large, 1,000-lb. oscillator? 10,000 lbs.? A better question might be “how much does the oscillator have to weigh in order to cause a proper earthquake?”